A BIT OF HISTORY


+ The Prophecy of the Popes, attributed to Saint Malachy, is a list of 112 short phrases in Latin. They purport to describe each of the Roman Catholic popes (along with a few anti-popes), beginning with Pope Celestine II (elected in 1143) and concluding with the successor of current pope Benedict XVI, a pope described in the prophecy as "Peter the Roman".

+ It is notable that where the interpretation of the prophecy is clear (as is the case for almost all of the Popes prior to 1590), the reference is almost always to some characteristic possessed by the Pope prior to assuming the Papacy—e.g., his birthplace, his arms, his surname, or his cardinal see. However, for more recent Popes, efforts to connect the prophecy with the pope have often focused on the events of his pontificate.This difference suggests that until 1590 the sentences were falsified, the author already knew the facts, but supporters, such as author John Hogue, who wrote a popular book titled The Last Pope about the claims, generally argue that, even if the author of the prophecies is uncertain, the predictions are still valid. We won’t know the validity of these predictions until time has passed.

+ The prophecy was first published in 1595 by Arnold de Wyon, a Benedictine historian, as part of his book Lignum Vitæ. Wyon attributed the list to Saint Malachy, the 12th‑century bishop of Armagh in Ireland. According to the traditional account, in 1139, Malachy was summoned to Rome by Pope Innocent II. While in Rome, Malachy purportedly experienced a vision of future popes, which he recorded as a sequence of cryptic phrases. This manuscript was then deposited in the Roman Archive, and thereafter forgotten about until its rediscovery in 1590. 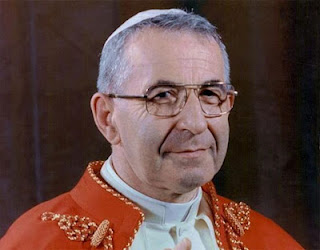 Possible explanation of the Latin text:

+ Albino Luciani, born in Canale d'Agardo, diocese of Belluno, (beautiful moon) Elected pope on August 26, his reign lasted about a month, from half a moon to the next half... before he died suddenly and mysteriously.

+ "Of the half moon" is a very accurate description regarding his beginning and also his short pontificate: After a life dedicated to the Church as a priest, he was elected Pope during the second day of the Conclave in August 26, 1978. He died of cardiac attack in September 28 1978, thirty three days after the beginning of his papacy.

+  We from the land can only see half the moon. Only astronauts and spacecraft have observed his half hidden, for our eyes, of the moon. The people of Earth can see the reflection of sunlight on the surface of the moon, a white light by minerals of our satellite.


+ The name of the Pope is the sum of two names or two styles of "To be Pope":  John Paul I was the first ever pope to assume a double name on election as supreme pontiff.  He assumed the name 'John Paul' in honour of his immediate predecessors, John XXIII (liberal style) and Paul VI (conservative style) . All previous popes had, on election, either kept their birthname or assumed a single name. His successor, John Paul II, assumed his papal name out of respect for John Paul I. One Pope divided into two halves.

+ His pontificate has some bright and pleasant, and a dark and hidden. On the one hand John Paul I had an infectious smile and a cheerful disposition. Even in formal settings he was often photographed with a smile on his face. He brought a certain informality to the papacy, refusing to be carried on public occasions, as had his predecessors, on the shoulders of servants..... and on the other side there were many conspiracy theories surrounding the death of Pope John Paul I, all claiming that he had been murdered. Those implicated in these theories included the Mafia, the KGB, the CIA, Nazis, and even a secret group of masonic cardinals. The official cause of death was myocardial infarction, a type of heart attack. The Vatican did not help to alleviate the conspiracy theories, as they allowed John Paul I's body to be embalmed within a day of his death without a detailed autopsy. 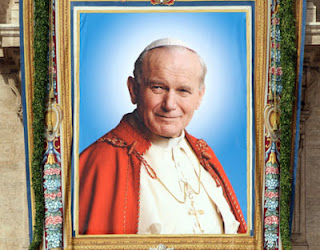 
Possible explanation of the Latin text.

+ What does the Sun? The sun rises in the east and sets in the west, he illuminates and warms the world wiping out the cold and darkness. John Paul II was born in a country in Eastern Europe (Poland) and destiny took him west to Rome, and from there traveled the world spreading the word of God.

+ This description fits John Paul II perfectly, since he emerged as a especial light for the Catholic Church, promoting the faith from all angles. The works of John Paul II were truly the work of God, the labor of the sun.

+ John Paul II was a great  traveler Pope, proclaimer of the gospel in more than 130 countries throughout the world, author of many apostolic letters, encyclicals and books. Canonizer of more saints in his pontificate than any other Pope in all history. During his last years as Pope he concluded his pontificate proclaiming the Holy Trinity, the Virgin Mary and the Eucharist. 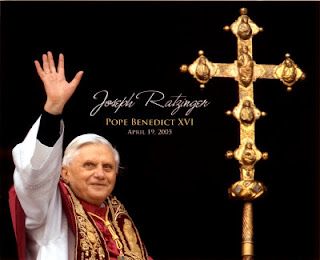 
Possible explanation of the Latin text:

+ Chose the name Benedict after St. Benedict who started the Benedictine order whose Crest is an Olive Branch.

+ Since he is said to have remarked in the Conclave after saying he would take the name Benedict that it was partly to honour Benedict XV, a pope of peace and reconciliation, perhaps Benedict XVI will be a peacemaker in the Church or in the World, and thus carry the olive branch.

+ The next pope could be a great peace maker.

+ Still not over his reign so theoretically the explanation of the Latin phrase this in some horrible future event: A great war like the one that explains the Latin phrase of Pope Benedict XV*:  104 Religio depopulata / 104 Depopulated religion.

*Benedict XV reigned during, but had no influence to stop, the First World War. This unprecedented period of violence was mainly fought between the Christian powers of europe, destroyed empires which had lasted centuries and began the worldwide spread of atheistic Communism.

+ So his work would bring peace to a world at war. 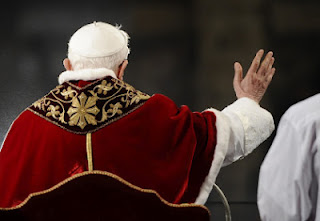 112-  In extreme persecution, the seat of the Holy Roman Church will be occupied by Peter the Roman, who will feed the sheep through many tribulations, at the term of which the city of seven hills will be destroyed, and the formidable Judge will judge his people. The End.

Possible explanation of the Latin text:

+ For some religious war or religious persecution, the pope was obliged to do their work outside of Rome (Italy). Rome will be held by horde of evil or any foreigner army and governed by someone very evil. The city will be destroyed and that's the list of popes.

+ John Hogue said that: Taking Nostradamus’ final line in mind, the next pope, in the name of peace reaches out to radical Islam. Unfortunately, the enemy turns on him, and the great plague foreseen comes out of biological or chemical weapons of mass destruction used by terrorists. A number of Nostradamus’ prophecies infer such attacks on Rome will take place, forcing the evacuation of a future pontiff.
http://www.hogueprophecy.com/2005/04/the-next-pope-signs-in-nostradamus/

+ Will this be the end of the ancient city of Rome?

Nostradamus wrote something similar about the end of Rome and the ruin of Italy  here:

CX - Q 65, English Version:
"O vast Rome thy ruin approaches.
Not your walls but rather of your blood.
The rough of letters will make a horrible mark.
He will get pointed iron to the hilt".

+ I suppose "Castor & Pollux in ship" means  John Paul I and John Paul II will lead the ship of the Catholic Church.
All explanation in this link:
http://prophecyexperimentalzone.blogspot.com.es/2011/08/nostradamus-and-ruinous-economy-part.html

Maybe the fisherman's boat is lost but anyone can find what has been lost.