SHE  KNEW,
SHE SAW IN A VISION THE 3 SECRET:

+ The Third Revelation of Fatima deals with the death and suffering of the Pope & people of the Church at the hands of soldiers. The Third Revalation was so upsetting that the the Catholic Church suppressed it for many years. The eldest of the children, Lucia explained that the Third Revelation should be released to the public by the year 1960, but the Catholic Church would not release the contents, but finally did so in the year 2000.
http://www.vatican.va/roman_curia/congregations/cfaith/documents/rc_con_cfaith_doc_20000626_message-fatima_en.html

DIXON
+ Dixon was a devout Catholic who worshiped at St. Matthew’s Cathedral downtown. She amassed Madonnas, busts of cardinals and a curious plastic bottle of holy water from San Damiano, Italy, with a taped handwritten label: “the most powerful water the earth has ever seen.” (It also warns you to say three Hail Marys before giving it to anyone.)
http://theblackcordelias.wordpress.com/2009/07/21/jean-dixon-devout-catholic-i-dont-think-so/


+ Dixon suffered a cardiac arrest and died at Sibley Memorial Hospital in Washington, D.C. on January 25, 1997; and three years before Pope John Paul II decided to reveal the third secret of Fatima.
http://en.wikipedia.org/wiki/Jeane_Dixon

+  What she regarded as a related vision came as she was at­tending to her daily devotions in St. Matthew’s (Washington, D.C.):

“Suddenly the very air seemed rarefied. A glorious light shown again from the dome of the cathedral, and be­fore me stood the Holy Moth­er. She was draped in purplish blue and surrounded by gold and white rays which formed a halo of light around her entire person. In a cloudlike forma­tion to the right and just above her I read the word ‘Fatima’ and sensed that the long-secret prophecy of Fatima was to be revealed to me.

I saw the throne of the Pope, but it was empty. Off to one side I was shown a Pope with blood running down his face and dripping over his left shoulder. Green leaves of knowledge showered down from above, expanding as they fell. I saw hands reaching out for the throne, but no one sat in it, so I realized that within this cen­tury a Pope will be bodily harmed. When this occurs, the head of the Church will there­after have a different insignia than that of the Pope. Because the unearthly light continued to shine so brightly on the papal throne, I knew that power would still be there but that it would not rest in the person of a Pope. Instead, the Catholic Church would blaze the trail for all peoples of every religion to discover the meaning of the Almighty Pow­er; to grow in wisdom and knowledge.

This, I feel sure, was the prophecy of Fatima.”
http://www.newoxfordreview.org/letters.jsp?did=0692-letters

+ The Hetoimasia, Etimasia (Greek ἑτοιμασία, "preparation"), prepared throne, Preparation of the Throne, ready throne or Throne of the Second Coming is the Christian version of the symbolic subject of the empty throne found in the art of the ancient world, whose meaning has changed over the centuries. In Early Christian art and Early Medieval art it is found in both the East and Western churches, and represents either Christ, or sometimes God the Father as part of the Trinity.

+ In the Middle Byzantine period, from about 1000, it came to represent more specifically the throne prepared for the Second Coming of Christ, a meaning it has retained in Eastern Orthodox art to the present. The motif consists of an empty throne and various other symbolic objects, in later depictions surrounded when space allows by angels paying homage. It is usually placed centrally in schemes of composition, very often in a roundel, but typically is not the largest element in a scheme of decoration.
http://en.wikipedia.org/wiki/Hetoimasia

THE VATICAN SAYS:
+ The Vatican proclaimed that Fatima prophecy was alluding to the attempted assassination of Pope John Paul II in 1981. The problem is that the scene depicted in the prophecy bears little resemblance to the assassination attempt. This has prompted some researchers to conclude that either the prophecy as released was not the complete prophecy given at Fatima, or that it refers to a Pope’s fate at some future date.

In the world there will be made a king
who will have little peace and a short life.
At this time the ship (of the Papacy) will be lost,
governed to its greatest detriment.

+ Jeane Dixon knew that was the third secret of Fatima before it was revealed.

+ Then Jesus said to the fisherman, "I will make you fishers of men",,,,,, that scene is the basis of biblical symbol of the ship as the Catholic Church and the Fisherman like the Pope.

+ The quatrain may mean that when a king must reign fighting the Catholic Church will lose its leader and will be misdirected. Nobody is in charge, empty.

+ According to St. Malachy prophecy of the Popes only two popes to steer the ship of the Church: Benedict 16 and Peter the Roman. 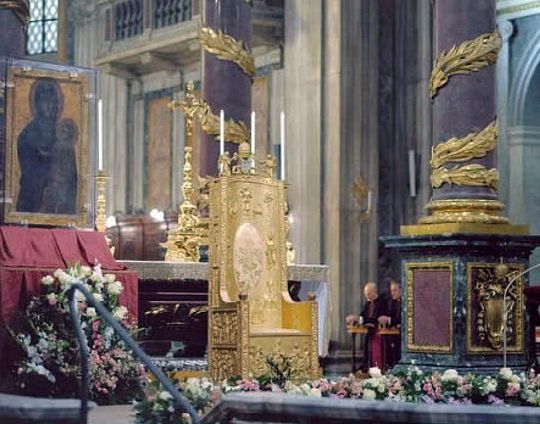 Maybe the fisherman's boat is lost but anyone can find what has been lost.