Pope John Paul II has made public the famous "third secret" of Fatima.

+ The Holy Father, who was in Fatima on May 13 for the beatification of two of the three children to whom the Virgin Mary appeared in 1917, asked Cardinal Angelo Sodano to read a message to the congregation at the end of the beatification ceremonies. That message, delivered in Portuguese, explained the third secret in general terms.

+ In order that the faithful may better receive the message of Our Lady of Fatima, the Pope has charged the Congregation for the Doctrine of the Faith with making public the third part of the secret, after the preparation of an appropriate commentary.

+ Since surviving the attempt on his life-- which occurred on the feast of Our Lady of Fatima-- Pope John Paul II has repeatedly said that he believes the Virgin Mary is responsible for his survival. A vision that can matches the attempted killing of Pope John Paul II himself on May 13,1981.

+ The secret involves a vision of an assassination on a Pope. The secret details a vision of a "bishop dressed in white" who is caught up in a battle against an atheistic system that oppresses the Church. That bishop "falls to the ground, as if dead, after a volley of gunfire." Sister Lucia, the sole surviving Fatima seer, has confirmed that the "bishop dressed in white" is the Pope. 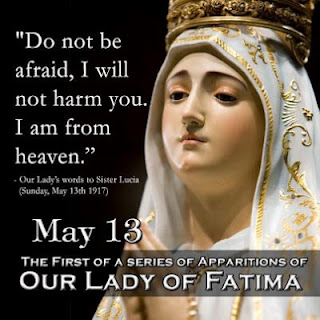 The following is the full text of the "third secret" in its original translation: (June 26, 2000)

"I write in obedience to you, my God, who command me to do so through his Excellency the Bishop of Leiria and through your Most Holy Mother and mine.

"After the two parts which I have already explained, at the left of Our
Lady and a little above, we saw an Angel with a flaming sword in his left hand; flashing, it gave out flames that looked as though they would set the world on fire; but they died out in contact with the splendor that Our Lady radiated towards him from her right hand: pointing to the earth with his right hand, the Angel cried out in a loud voice: "Penance, Penance, Penance!"

"And we saw in an immense light that is God: "something similar to how people appear in a mirror when they pass in front of it" a Bishop dressed in White "we had the impression that it was the Holy Father."

"Other Bishops, Priests, men and women Religious going up a steep mountain, at the top of which there was a big Cross of rough-hewn trunks as of a cork-tree with the bark; before reaching there the Holy Father passed through a big city half in ruins and half trembling with halting step, afflicted with pain and sorrow, he prayed for the souls of the corpses he met on his way;

"having reached the top of the mountain, on his knees at the foot of the big Cross he was killed by a group of soldiers who fired bullets and arrows at him, and in the same way there died one after another the other Bishops, Priests, men and women Religious, and various lay people of different ranks and positions.

"Beneath the two arms of the Cross there were two Angels each with a crystal aspergilium in his hand, in which they gathered up the blood of the Martyrs and with it sprinkled the souls that were making their way to God."

The "third secret was written down by Sister Lucia

+ She the only survivor among the three children to whom the Virgin Mary appeared at Fatima in 1917. Sister Lucia--  Carmelite nun-- wrote down the text in 1944, at the request of the local bishop.

+ Sister Lucy of Fatima died on February 13, 2005 at 97 years of age. Doctor Branca, a gifted doctor and painter, was at her bedside taking her pulse, and felt her last heart beat. Lucia did not die of any sickness other than a flu that was going around all of Portugal, and most of the nuns in Coimbra had it. Lucia just died of old age and the flu was more than the old body could take.

+ The document was released through the Congregation for the Doctrine of the Faith, of which Cardinal Ratzinger and Archbishop Bertone are prefect and secretary, respectively. The text was published simultaneously in English, Italian, German, Spanish, French, Portuguese, and Polish translations.

+ Archbishop Bertone points out, in his introduction to the message, that the Fatima apparition is "undoubtedly the most prophetic" message from the Virgin Mary. He goes on to observe that it was inconceivable that in 1917,three young shepherd children would have predicted World War II and the rise of a totalitarian empire in Russia.

+ The text of the "third secret" was included in a 40-page document which also contained a theological commentary by Cardinal Joseph Ratzinger, an introduction by Archbishop Tarcisio Bertone, and several short texts that were apparently included to underline the authenticity of the text.

+ The full 40-page document made public by the Vatican explained that Pope John XXIII read the "third secret" in August 1959, but decided not to publicize it.

+ Pope Paul VI made the same decision in March 1965. Soon after the attempt on his life on May 13, 1981, Pope John Paul II re-read the secret, and decided to consecrate the world to the Virgin Mary-- an act which he carried out on June 7, 1981. Sister Lucia confirmed that this consecration fulfilled the wishes of the Lady of Fatima.


+ Finally, Archbishop Bertone concludes his sketch of the history of the
message by recalling that in May of this year, Pope John Paul decided to
make public the full text of the Fatima secret. That decision, the
archbishop writes, "brings to an end a period of history marked by tragic human lust for power and evil, yet pervaded by the merciful love of God and the watchful care of the Mother of Jesus and of the Church."

+ In his theological commentary on the "third secret" of Fatima, Cardinal Joseph Ratzinger emphasizes that the key to understanding the Fatima message lies in the words attributed to the Virgin Mary: "Penance, penance, penance!"

+ Cardinal Ratzinger adds that a second crucial aspect of the Virgin's message is her reassurance that "my Immaculate Heart will triumph."

Nostradamus also wrote about the death of the Pope.

This is one of the quatrains he wrote about the murder:

Roman pontif beware of approaching
a city watered by two rivers.
You will spit blood in that place,
both you and yours, when the roses bloom.

+ Some people think that the secret was fulfilled when Ali Agca tried to kill the Pope in Rome, but occurred in circumstances that are not described in the third secret. The Vatican is in a plain near the river Tiber, there are ancient ruins, shooting only affected the Pope. Others say the Vatican has not told the whole story. Nostradamus warns that the Roman pontiff, or Pope, will die along with his traveling companions near where two rivers, and there is more to tell .... including the prophecies of St. Malachy.