MASSACRE BY DECREE 2: THE EXTRAORDINARY STORY OF THE BOMB COULD NOT EXPLODE


And a extraordinary bomb and odd.

+ There follows a series of terrorist attacks on four trains in the Madrid commuter rail network (Spain). 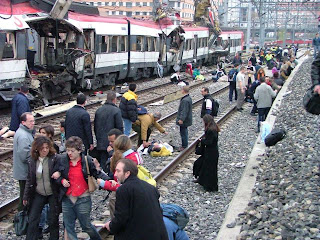 + 10 near-simultaneous explosions on four trains during rush hour in the morning (between 7:36 and 07:40). Later, after an attempt to off, police detonated in a controlled manner, two bombs had not exploded, disabling a third party who would, with its contents, start the first investigation that would lead to the identification of the authors. 191 people died and 1,858 were injured. 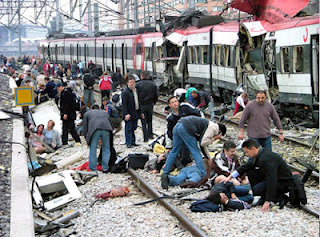 + At two am on March 12, 2004, at the police station of Puente de Vallecas appeared a sports bag in navy blue and brown leather tote containing a garbage bag with wires and a mobile phone.

+ We do not know where it came from because no one would worry about it (although in theory the police should have sealed off the area and inspected all packages).
Immediately, the officers in charge of the objects moved to expunge the police called the 091 that they should come experts in explosives or TEDAX (1).


+ After an initial inspection, the explosives expert decided to move the bag in a police car to Azorin park, close to the police station. Once there, place a plate on which one could see the wires, a detonator, mobile phone, the gelatinous mass of Goma 2 dynamite and nails that were to act as shrapnel. After doing so, and once tried to make the explosive from the bag using a jig, decided to dismantle the device manually. He did so and managed to rescue the phone and the card that were key to the investigation.

+ Not only was established with absolute accuracy that the explosive used to blow up trains was dynamite GOMA 2 Titadine not, as police said on the morning of March 11, but it took until the perpetrators of the slaughter by two ways: the mobile Trium-T-110 and the prepaid SIM card company Amena containing the apparatus.

+ The unexploded device contained 10 kg (22 lb) of explosive with 1 kg (2.2 lb) of nails and screws packed around it as shrapnel. In the aftermath of the attacks, however, the chief coroner (Carmen Baladia) alleged that no shrapnel was found in any of the victims.


Not connected
The bomb did not explode because one wire was not connected.  Anyone who has seen the x-ray of the explosive device would know, was very easy to move and to remove the explosive.


Not delivered
Despite the documentary value of the radiograph, it was not delivered to the judge Del Olmo until late July 2004.Sin reason, the chief inspector Vadillo Caceres held her in his office.


No tape
Furthermore, the connection between the wires out of phone and the detonator was not protected by any type of tape.


No shrapnel
In the bag of  police station  the dynamite was mixed with 640 grams of screws and nails and the detonator, but the other 12 pumps had not screws or nails. These 12 bags did not contain shrapnel.

But the most striking and has gone unnoticed, especially in the trial since none of the defense lawyers had an impact on this issue was on the shrapnel from terrorism. This issue is of paramount importance. The judgment states that between the explosive found in the Vallecas backpack and the Kangoo, the Leganes, the "Chinchón" and even the train is a "multiple bond, unambiguous precise and direct." However, in the stock Vallecas, which gave the Court a certificate of naturalization, there were plenty of shrapnel: nails, screws, etc.. Ten backpacks like that have claimed the lives of 191 people according to the judgment.

"In the victims' bodies of 11-M had shrapnel, nails, screws?" asked Luis del Pino to  Carmen Baladía the chief coroner . "Nothing, nothing at all. Of the 191 bodies only think that in a metallic fragment was found, it should be, of course, trains. But no nails or bolts, or screws. There was shrapnel from our 191 people" she replied emphatically.
http://www.libertaddigital.com/nacional/ni-clavos-ni-tuercas-ni-tornillos-no-habia-metralla-entre-nuestros-191-muertos-1276321976/


No need SIM
In theory, mobile phones were the dual role of providing electrical energy explodes the detonator, dynamite and sympathy, and, secondly, by acting as timer alarm clock. The mobile phone makes this function even when switched off, thus preventing a wrong to cause any disruption. No need the prepaid SIM card.

What then, are  terrorists  stupid?


+ People who use bombs knows what he wants done and how it is going to do. These criminals control the situation. They decide what will happen, where and when.

+ The terrorists of September 11 and London, they were really suicide bombers. They only cared to get to the place provided and explode or crash.

+ The bomb was found in the police station was disconnected because it was necessary to be disconnected. Not is a mistake, is a bait. This is a line that must be followed to catch someone as planned from the beginnig by their authors. They did so and managed to rescue the phone and the card that were key to the investigation.