----"Begin at the beggining and end when you reach the end then you stop, of course."

+Some people think it is a wet ground, but if you look on the official map, i guess the bag is buried in the central zone that has a little dry area (pool 6, north):
http://extra.mdc.mo.gov/documents/area_brochures/7902map.pdf

+The photo is a treasure map.

+ Mccormick´s stenographyc  notes tell us how we can find 99.840 dollars and more hidden in a suitcase buried in the Marais Temps Clair conservation Area (MO).

+ This is the meaning of the first line of note 1 (MRS = MaRaiS) and note 2 numbers:

+ Can anyone tell me if the house next to the conservation area has really the number 35?

I have found the house number 35 where I had calculated: 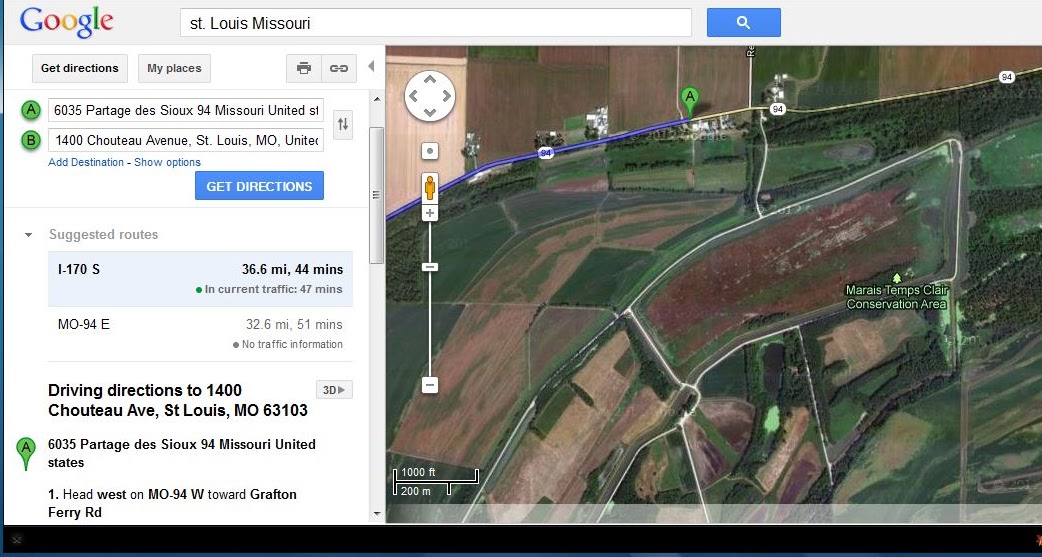 + And now, where we have 651 steps up to the curve and to find the hidden suitcase? Look:

+ This is my second choice if one step is equivalent to 76.02 ccentimeters. Is the pool area 9 of Marais ....and I continued looking for a hole, trench or Shed (like a pit of Birdwatching, perhaps).

+ It appears that McCormick worked at a gas station in 1601 Chouteau Avenue, owned by a family connected with the world of crime.

+ At a gas station there are maps of the city, county and state of Missouri, this fact would explain how he could know the distance between St. Louis and Marais. See:

“Code Dead: Do the encrypted writings of Ricky McCormick hold the key to his mysterious death?” By Christopher Tritto (published: June 14, 2012)

+ And also would explain errors. It is necessary to note that the search must be conducted according to the physical and temporal conditions of 1999 in Missouri.

"I noted the address on the mailbox of that house across the street from the entrance and it isn't 6035,...it's 6211...you could probably see that for yourself using google maps when you position the street view there."

+ There is another entrance to the park.

+ If the southern entrance to the park is 35 miles from the residence of mccormick......

This is a change from the starting point but the original idea remains.