NOSTRADAMUS AND THE RUINOUS ECONOMY. part one.

THE RUIN OF THE WORLD
(AND ESPECIALLY OF ITALY).
(Part one).

-----"The public treasury emptied by land and sea". This phrase was written by Nostradamus 500 years a go and if we can write the whole quatrain placing it in a specific space and time. Quatrain number 15 of the 2nd Century and is wrote:

-----Let is start at the beginning and sentence by sentence:


++King Faisal of Saudi Arabia was assassinated by one of his nephews the march 25, 1975, at a meeting of public policy. The murderer was considerer insane but was judged by regicide, and sentenced to death. He was beheaded in a public square in the capital Riyadh, a few months later, in June. The regicide motive was revenge, they say.


++This phrase is often associated with Popes Jhon Paul I and Jhon Paul II that took place on the throne of St. Peter, a fisher of men, immediately. The use of "ship" as symbol of the Church is very old but we can see developed in a historical film entitled "BECKETT" starring Peter O´Toole in the role of King, and Richard Burton in the role of friend king and Archbishop of Canterbury; and Castor and Pollux is an analogy based on Greek mithology.


-----Castor and Pollux were siblings from different fathers, Castor was mortal and the second, son of Jupiter, was immortal. Pollux was very fond of his brother. When Castor died in a fight Pollux begged his father back to life Castor but Jupiter could not do it and opted for a solution a little cruel: He consented that Castor as long as he lived on earth Pollux could dwell in the abode of the dead, thus alternately lived and died. Some years later, Jupiter moved by mutual love for each other, placed between the stars where under the name of the Twins are two constellations, one of which dissapears when one is born, so never found together on the horizon. 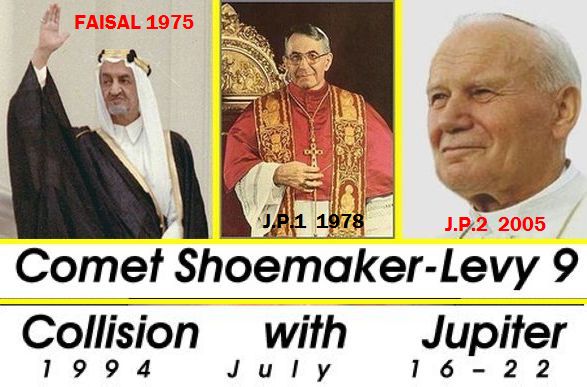 -----So we have King Faisal was murdered in 1975, shortly after John Paul I  died in 1978 and was immediately replaced by John Paul II who died in 2005, and in between something spectacular: A planetary collision, the comet SL-9 crashes into the planet Jupiter in July 1994.

-----The SL-9 is the comet Shoemaker-Levy 9 fragments impact divided into Jupiter´s atmosfere in 1994. This unique event was very popular, many observatories conducted intensive observation campaigns that incluided the Hubble space observatory and the Galileo probe that obteined good images that the media broadcast. Even Robert Smith, a member of British band THE CURE wrote the song JUPITER CRASH, part of the group´s album WILD MOOD SWINGS.


++"L´Erain" is the treasury of a city, province or state; or also all assets, income and taxes it collects a local, provincial or state. The words ofthe quatrain indicates excessive and irresponsible spending of state assets, like what happends today in Iceland, Greece, Portugal, Ireland, Spain, U.S. and others required, or spends less and collect more detrimental to its citizens cheated by their leaders. The only one who is in a jail is one such Madoff, private con, man who gets beaten from time to time and has lost one of this sons, an employee, who has commited suicide recently.


++I do know when or how Pisa, Asti, Ferrara and Turin are convicted, their fate is tragic for natural, industrial or political catastrophe (war o revolution) and will shortly. Prepare your business and go away from these cities, areas or Italy. 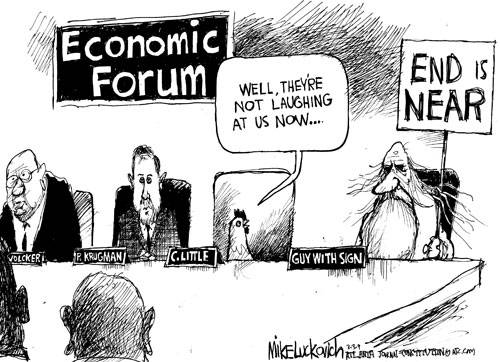 -----And that there are far worse quatrains with references to Italy and the quatrain number 65 of Century X which reads;

CX - Q 65, English Version:
"O vast Rome thy ruin approaches.
Not your walls but rather of your blood.
The rough of letters will make a horrible mark.
He will get pointed iron to the hilt".

note: "cocher" is a transitive verb, principal translation "put or make a mark". In US use "to Check" and in UK use  "to Tick"(from wordreference.com).

Or not:
A swiss central banker to see euro crisis like Nostradamus?

05/march/2012:
-Begins the trial of former Prime Minister of Iceland by the economic ruin of their country.