ISHMAEL AND HIS SONS, THE ISHMAELITES.


Ishmael is the name of a character in the Abrahamic religions (Jewish, Christian and Muslim), ancestor of the Ishmaelites (ismailios) or Arabs. This is one of the characters that cause controversy among the followers of the Abrahamic faiths who have different versions and views on Ismael.


All three religions believe that Ishmael was the first son of Abraham. However, the Judeo-Christian tradition gives a preference to Isaac, while Muslims opt for Ismael. For example, in the Torah and the Bible, it is considered that Isaac was chosen to be sacrificed by Abraham, while the majority of Islamic scholars believe that Ishmael was the chosen one to be sacrificed, but not mentioning the name says, Quran implies that it is Ishmael, all scholars believe so.


Islam does not deny God's blessings to Isaac and his descendants, or belittle his high rank in the Quran and there is not really much difference between the two sons of Abraham, especially if you compare this with the Bible or the Torah. However, the child of promise (the firstborn) is Ishmael who later came to the prophet Muhammad Islam who is the last Prophet and the seal of the prophets.

Ishmael is recognized as an important prophet and patriarch of Islam. Muslims believe that Ishmael was the firstborn of Abraham, born to him from his second wife Hagar. Ishmael is recognized by Muslims as the ancestor of several prominent Arab tribes and being the forefather of Muhammad. Muslims also believe that Muhammad was the descendant of Ishmael that would establish a great nation, as promised by God in the Old Testament.
http://en.wikipedia.org/wiki/Ishmael

1- Black Horn is the Horn of Africa comprising of the following states: Somalia, Ethiopia, Eritrea ... that still are at war. 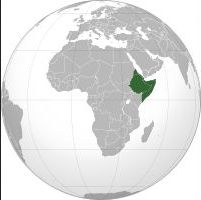 INFO:
+ The Horn of Africa (Amharic: የአፍሪካ ቀንድ?, Arabic: القرن الأفريقي‎, Somali: Geeska Afrika, Tigrinya: ቀርኒ ኣፍሪቃ?) (alternatively Northeast Africa or Somali Peninsula; shortened to HOA) is a peninsula in East Africa that juts hundreds of kilometers into the Arabian Sea and lies along the southern side of the Gulf of Aden. It is the easternmost projection of the African continent. Referred to in ancient and medieval times as Bilad al Barbar ("Land of the Berbers"), the Horn of Africa denotes the region containing the countries of Eritrea, Djibouti, Ethiopia and Somalia.
http://en.wikipedia.org/wiki/Horn_of_Africa

2- Dalmatia was an ancient Roman province comprising almost the entire coast of the former Yugoslavia. Nostradamus refers to the Yugoslav civil war that divided the country into several independent states, and massacres like Srebrenica. 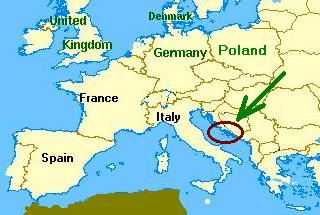 INFO:
+ Dalmatia was an ancient Roman province. Its name is probably derived from the name of an Illyrian tribe called the Dalmatae which lived in the area of the eastern Adriatic coast in Classical antiquity. It encompassed much of today's Croatia, Bosnia and Herzegovina, Montenegro, Serbia etc, an area significantly larger than the current region of Dalmatia.
http://en.wikipedia.org/wiki/Dalmatia_%28Roman_province%29
http://www.dalmatica.com/

+ The Srebrenica massacre, also known as the Srebrenica genocide,  refers to the July 1995 killing, during the Bosnian War, of more than 8,000 Bosniaks (Bosnian Muslims), mainly men and boys, in and around the town of Srebrenica in Bosnia and Herzegovina, by units of the Army of Republika Srpska (VRS) under the command of General Ratko Mladić. The mass murder was described by the Secretary-General of the United Nations as the worst crime on European soil since the Second World War
http://en.wikipedia.org/wiki/Yugoslav_Wars
http://www.geopoliticalmonitor.com/breaking-yugoslavia-936/
http://en.wikipedia.org/wiki/Srebenica_massacre

4- Lusitania is the current state called Portugal. Portugal has defended the helpless citizens of East Timor, and has helped them regain independence (Indonesia by the force stole).

INFO:
+ Remember that an ordinary frog can turn into a prince if you kiss her.

+ East Timor was colonized by Portugal in the 16th century, and was known as Portuguese Timor until Portugal's decolonization of the country. In late 1975, East Timor declared its independence, but later that year was invaded and occupied by Indonesia and was declared Indonesia's 27th province the following year. 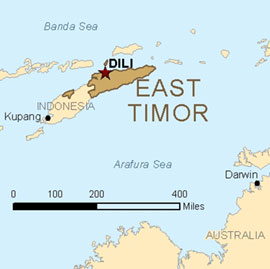 + As the follow-up step to Habibie's request, the United Nations organised meeting between Indonesian government and the Portuguese government (as the previous colonial authority over East Timor). On 5 May 1999, these talks resulted in the “Agreement between the Republic of Indonesia and the Portuguese Republic on the Question of East Timor” which spell-out the details of the requested referendum. The referendum was to be held to determine whether East Timor would remain part of Indonesia, as a Special Autonomous Region, or separate from Indonesia.

+ The Indonesian government accepted the result on 19 October 1999 by repealing the laws that formally annexed East Timor to Indonesia. The United Nations passed a resolution establishing a transitional administration (UNTAET) in East Timor starting a transition process that would lead to independence in May 2002.
http://en.wikipedia.org/wiki/East_Timorese_independence_referendum,_1999

-Century X - Quatrain 31. Possible english version:
The Holy Empire will come into germany
The Ishmaelites will find open places
The asses will want also Carmania
The supporters all covered by earth.

This quatrain has already been explained before:
http://prophecyexperimentalzone.blogspot.com.es/2012/02/war-01-nostradamus-us-and-iran-formerly.html

1- The great economic power of Germany in the European Union today.

INFO:
"Holy Empire" is  The Holy Roman Empire (German: Heiliges Römisches Reich, Latin: Imperium Romanum Sacrum, Italian: Sacro Romano Impero, Czech: Svatá říše římská), Slovene: Sveto rimsko cesarstvo ) was a varying complex of lands that existed from 962 to 1806 in Central Europe. Its character changed during the Middle Ages and the Early Modern period, when the power of the emperor gradually weakened in favour of the princes. In its last centuries, it had become quite close to a union of territories. It is a former union of European countries.
http://en.wikipedia.org/wiki/Holy_Roman_Empire

2- the takeover of the Muslims after the Arab Spring.

3- The defeat of the Democratic Party (Government & Asinus, a subgenus of Equus that includes the donkey and other asses ) and Army of the United States after invading southern Iran (Carmania, old provice of Persia -actually Iran-).

Century 9 - quatrain 43. Possible English Traslation.
On the point of landing the Crusader army
Will be ambushed by the Ishmaelites
Struck from all sides by the ship Impetuosity,
Rapidly attacked by ten elite galleys.

Quatrain 34 - Century II. Possible English Traslation:
The senseless ire of the furious combat
Will cause steel to be flashed at the table by brothers:
To part them death, wound, and curiously,
The proud duel will come to harm France.


I guess:
+Interestingly the fight between brothers harm to France. If my assumption is correct in Lyon, France, a critical battle between Muslims and Europeans happen when you see the comet and the pope is assassinated near Lyon.

Century III - Quatrain 90 . English version:
The great Satyr an Tiger of Hyrcanie
Gift presented to these of the Ocean
A fleet´s (or Army´s) chief will set out from Carmania
One who will take land to the Tyrren Phocean

COMMENT:
I guess that Nostradamus refers to Iranian naval chief invade Europe, somewhere between Italy and France reached its "present" to members of NATO (The North Atlantic Ocean Treaty Organization).

+CARMANIA has the north coast of The Strait of Hormuz, was a Satrapy of the Persian an Seleucid Empires in the southern Persian Gulf. Actually, it is the provinces of Hormozgand and Kerman, Iran.

I think Nostradamus refers to the capital of Iran by mentioning Hyrcania.

+ And now I expect Obama's visit to Jerusalem riding his "beast", as I already wrote over a year ago.