MURDER BY DECREE: A MASSACRE IN SPAIN .


This is a story of hundreds of murders by decree (and a story of police dogs trained to find explosives).

+Prologue: "The silver Blaze".
+The official version: 2004 Madrid train bombing.
+Hannibal & Lovi: The trained police dogs and the first lies.
+A wagon train that should be scrapped: The last official lie.


-Gregory (Scotland Yard Inspector) then said:
"Is there anyother point to which you would wish to draw my attention?"

-SH:
"To the curious incident of the dog in the nigth-time"

-Gregory:
"The dog did nothing in the nigth-time"

-SH:
-"That was the curious incident".


- So you know everything you need to solve this horrific crime.
http://www.youtube.com/watch?v=FhvcEj4jhhY 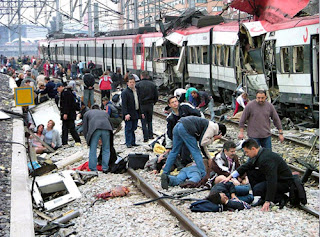 -The Madrid train bombings were simultaneous and cordinated bombings against the "Cercanias" (commuter train) system of Madrid, Spain, on the morning of thursday 11 march 2004 (7.30-8.00, UTC +1). The explosions killed 192 people and wounded 1857.

-The official investigation by the Spanish Judiciary determined the attacks were directed by an al-Qaeda inspired terrorist cell although no direct al-Qaeda participation (only inspiration) has been officially established. Though they had no role in the planing or implementation, the Spanish miners who sold the explosives to the terrorist were also arrested.

-On April 3, 2004, police located and surrounded several members of the terrorist in Leganes ( Madrid ). When cornered, its members , commited suicide by blowing up the floor that had been entrenched, this being first suicide attack in Europe, when the "GEOS" (they are similar to "SWAT") began the assault. In this action group killed a police agent, as well as all members of the islamist cell were present.


+Hannibal & Lovi: The trained police dogs and the first lie.

- In the official version the van Renault Kangoo which appeared in Alcalá (Madrid) plays a key role. It is claimed that the van transported the terrorists and their bombs on the day of the attack, and inside the police found under the passenger seat a garbage bag with 7 detonators and one piece of explosive cartridge.

- The problem with this official story is that this van was revised in the crime scene by two different dogs trained to detect explosives: "Hannibal" and "Lovi".

-One of the dogs inspected  the van just outside, but if there had been explosives the dog would have detected. Anyway, the second dog came inside the van, and inspected, and could not find the slightest of any explosive that there would. And then the police was ordered to take the van to a police building without suspecting anything strange. There someone found the explosives.

-The official explanation for this curious incident is simple:
THE DOGS WERE TIRED !!! .

-The defenders of the official version are forced to appeal to the argument that the day there was an attack and the dogs may be tired and confused by smell strange things.

-The facts are as follows:

1+The dog handlers responsible for the dogs who were at the crime scene testified in court that both the male dog "Hannibal" and the female dog "Lovi" only had two services earlier that morning.

-This means that the dogs had not been that morning at any time in any scenario where they could smell traces of explosives and explosions nor had only two interventions with the most common objects. The dogs were not tired of smelling traces of explosives.

-This means that there never were explosives in the van ....until the van reached the installations of the police, and some members of the police fabricated false evidence to acusse Muslims.

+A wagon train that should be scrapped: The last official lie.

-The day after the terrorist attack began the destruction of the scene of the slaugther without the usual order of the judge. At the trial police, prosecutor and examining magistrate asserted that all wagons where there were explosions were destroyed.

-We now Know that the police, the examining magistrate and the prosecutor lied.

-This is the evidence that was discovered a few days.

-Someone wanted to repair one of the wagons exploded at the "Santa Eugenia" train station and his remains are in the shed of a bankrupt company (TAFESA).

-.....And there are many more official lies. Unfortunately for me and my country.

+The official report of the railroad company (RENFE) about it the final destination of the train cars was delivered to the Court about a month after the end of the trial.

-a) RENFE said that the trains cars were destroyed on the 13th and March 14th, 2004.
-b) RENFE said one train cars in which a bomb was repared  but does not say where it is.


.......AS YOU CAN SEE THIS WAS DONE SO POORLY IN SPAIN JUDGEMENT ON THE MOST SERIOUS CRIME COMMITED IN MY COUNTRY.

MASSACRE BY DECREE 2:
THE EXTRAORDINARY STORY OF THE BOMB COULD NOT EXPLODE
http://prophecyexperimentalzone.blogspot.com.es/2012/08/massacre-by-decree-2-extraordinary.html

MURDER BY DECREE 4:  TEN YEARS AGO WITHOUT AZNAR & ZAPATERO